PURIM!  What a time in history to be celebrating this inspiring victory that the Lord brought about for the Jewish People through Mordecai and Queen Esther!

What was life like in Shushan, the capital of Persia, for Mordecai a Jew in the lineage of exiles from Judah, and Hadassah, his uncle’s orphaned daughter, whom he adopted?  Queen Vashti disobeyed King Xerxes’ orders to appear before him and his guests at his banquet, and a decree went out to the king’s vast empire of 127 provinces that stretched from India to Ethiopia.  Amongst other things, the king decreed that “each man should speak in the language of his own people.”  (Esther 1:22)

Mordecai was a devout Jew and grateful to be encouraged to speak to Hadassah in their Hebrew tongue at home.  Mordecai, who sat within the King’s gate, attracted attention to himself when he refused to bow to or worship prince Haman, the King’s newly promoted prime minister.  Seeing that all the King’s servants who were within the King’s gate bowed to Haman, he was filled with wrath towards Mordecai.  His hatred and contempt for Mordecai progressed from wanting to kill him to being obsessed with destroying every single Jew spread throughout the whole kingdom.  Haman approached the king with his plan and was willing to pay the king to issue a decree for the death of every Jew in Persia.    King Xerxes was persuaded that these people, “whose laws are different from all other peoples and do not keep the King’s laws” (Esther 3:8) needed to be eradicated, and told Haman “The money and the people are given to you, to do with them as seems good to you.”  (Esther 3:11)  King Xerxes was convinced that it was not in his interest to let the Jewish people live.

After being encouraged to speak Hebrew, or having been given the freedom to live as Jews, they now found out that their King had sent a letter to all his provinces “to destroy, to kill, and to annihilate all the Jews, both young and old, little children and women, in one day, on the thirteenth day of the twelfth month, which is the month of Adar, and to plunder their possessions.”  (Esther 3:13)  And then we see that “the King and Haman sat down to drink, BUT THE CITY OF SHUSHAN WAS PERPLEXED / CONFUSED”.   (Esther 3:15)  (Emphasis added.)

There have been numerous times when rulers have issued laws that have left people puzzled and confused as to how this law could so suddenly come into effect, disrupting and changing the course of their lives.   If the whole city of Shushan was confused, imagine how the Jewish inhabitants felt?  The spirit of fear brings confusion.  Fear gripped their hearts and they couldn’t think straight.

BUT Mordecai was convinced that God’s plan to rescue His people had already begun, long before the king’s unchangeable decree was issued.  He had already literally stood up to Haman by refusing to worship him.  Mordecai chose to be clear-headed and appeal to his adopted daughter, who had in the meantime miraculously become Queen Esther after her marriage to King Xerxes.  Queen Esther seemed to be unaware of the decree and did not know that her own life was in danger of being annihilated on the thirteenth day of Adar.

Despite hesitating at first, Esther chose to trust God and move forward.  Although so much depended on her, she knew she could not do this alone.  She instructed Mordecai to gather all the Jews who lived in Shushan to fast with and for her.  She needed the support and wisdom in order to approach the king, at her own peril, at the end of three days.

After the king received her with GREAT favor, she again risked her life at the second banquet that she organized for the king and Haman.  Esther revealed to the king and Haman that she was a Jew and that she identified with her people who had been sold to be destroyed.  “If I have found favor in your sight, O king, and if it pleases the king, let my life be given me at my petition, and my people, at my request.” (Esther 7:3)  Esther is a role model for taking ownership of one’s destiny and doing whatever it takes to fight for the destiny of her people, despite the risk and consequences.  In doing so, she saved herself and the Jewish people.

Queen Esther divulged that “the adversary and enemy is this wicked Haman!”  (Esther 7:6)  The king’s wrath only subsided after Haman was hanged on the very same gallows that he had prepared for Mordecai.

“the adversary and enemy is this wicked Haman!” (Esther 7:6)

When wicked Haman’s plan to finally and utterly destroy the Jews was exposed, the opposite happened.  Haman’s plan boomeranged on him – he and his evil plan were annihilated.  Haman’s estate was given to Queen Esther and Mordecai was appointed the prime minister.

A divine reversal took place and the curse on God’s first-born was reversed.  God led His people in triumph by sparing their lives!! There are enemies who are obsessed with destroying modern day Israel and the Lord’s first-born, wanting to take Jerusalem as their first prize.  May the God who NEVER slumbers OR sleeps, continue to keep, protect, and guard Israel.  The God of angel armies has proven Himself faithful over and over again.  May this Purim prove how He is able to cause the enemy’s plan to backfire.  May Haman hang on his own gallows.  “Pray for the peace of Jerusalem: may they prosper who love you.  Peace be within your walls, prosperity within your palaces.” Psalm 122:6 & 7.

To this day, Jews across the globe celebrate Purim, and have taken Mordecai seriously.  “Mordecai wrote these things and sent letters to all the Jews, near and far, who were in all the provinces of King Ahasuerus [King Xerxes], to establish among them that they should celebrate yearly the fourteenth and fifteenth day of the month of Adar, as the days on which the Jews had rest from their enemies, as the month which was turned from sorrow to joy for them, and from mourning to a holiday, that they should make them days of feasting and joy, of sending presents to one another and gifts to the poor.” (Esther 9:20-22)

How do we celebrate Purim here in Canada?  The Lord has the same for us in mind.  May we find rest from our enemy, may this be a month where our sorrow is turned to joy, may our mourning be turned to a holiday, that we should have days of feasting and JOY.  Another aspect of celebrating Purim that Mordecai wrote about in his letter is charity, either in the form of a present or a donation by giving to the needy.  May we take this opportunity to donate to this brand new project of Kanada House that the Lord has just birthed in such a miraculous way.  Those that will be receiving the blessing of finding refuge at Kanada House are needy and poor in spirit.

The tables were turned when the place of disadvantage that the Lord’s first-born found themselves in, turned to a position of advantage.  Such a time of celebration and joy!  This is what our heavenly Father wants to do for each one of His beloved and cherished children, in this month of Adar.  May we experience amazing times of breakthrough, and know that it was ONLY the Lord who could have done this for us.  May we also know that we cannot win this battle on our own, but that we need each other. 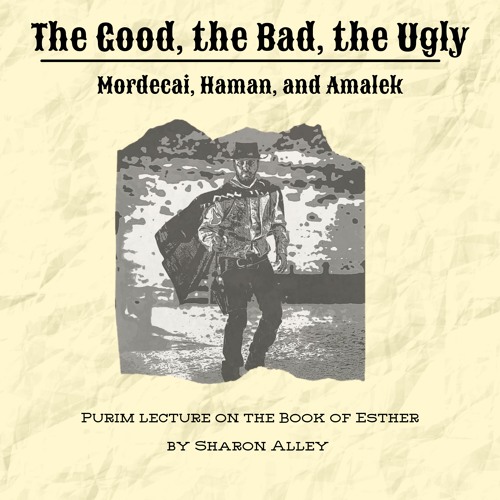 Purim Lecture on the Book of Esther: “The Good, the Bad, the Ugly” (Mordecai, Haman & Amalek) presented by Sharon Alley in 2021 from Christ Church, Jerusalem.